With no time to waste, we awoke at 4:30 am and bade a fond adieu to Iceland, first stopping to exchange our krona for British pounds. Given the high prices we paid in Iceland, Lewis was determined to get our VAT refund, and took us on a tour of the Reykjavik airport, until we found the proper officials, who gladly refunded the onerous Icelandic tax and exchanged our currency, after taking a generous fee for the good people of Iceland. We boarded the plane from a stairway. As we stepped into our 757, Lewis smiled, waved, and bid farewell to the Island of Fire and Ice, as the bemused flight attendants looked on.

Arriving in Glasgow, we gathered our bags and headed for the taxi. Overhearing a cab driver announce that a colleague could “go Fook himself,” we knew that we had arrived in a quite different culture. No matter, we could adjust, and headed into Glasgow to drop our bags.

Glasgow is a gritty, industrial town, which has its charms. They were not, however, immediately apparent to road-weary Americans who had been up since 4:30 am. We did find a Starbucks, to Brad’s great relief, and stayed for an hour or so, before setting off on a shopping spree to find a European plug, which we were able to locate in a local hardware store. Wandering about some more, we finally stopped at a Holiday Inn, where we had a lunch that would have pleased Chef Boy-ar-dee, but no one else above the age of seven. The only good news was that the hotel was able to call a car service to take us back to the Glasgow airport, where we boarded a prop plane for the Island of Islay ( say it “eye-la”) and the start of our “whiskey tour” of Scotland. We flew on the ominously named “Flybe Airlines,” an economy carrier operated by Logan Air. Brad had read in the local paper that a safety investigation of Flybe had been started after reports that one Flybe pilot had inappropriately referred the co-pilot as “his bitch,” an apparent violation of the Flybe code of conduct. We soon learned, however, that our craft was piloted by two female pilots and settled down for the short 30 minute flight.

Just before landing, Brad realized that he had forgotten his computer bag in the Glasgow airport, which contained a netbook and an iPad. This may have been due to a lack of sleep, or quite possibly the realization that it was a rather crummy laptop, but it was gone all the same, setting off later adventures at the British equivalent of Best Buy, which I shall report on later.

Arriving in Islay, Lewis took possession of our car and we headed toward Port Charlotte and a lovely inn on the water in a town of white washed buildings and small boats. It was the perfect antidote for Brad to the Hotel Latrabjarg. We had an outstanding dinner, celebrated with an expensive bottle of wine, and concluded another long day of adventure. 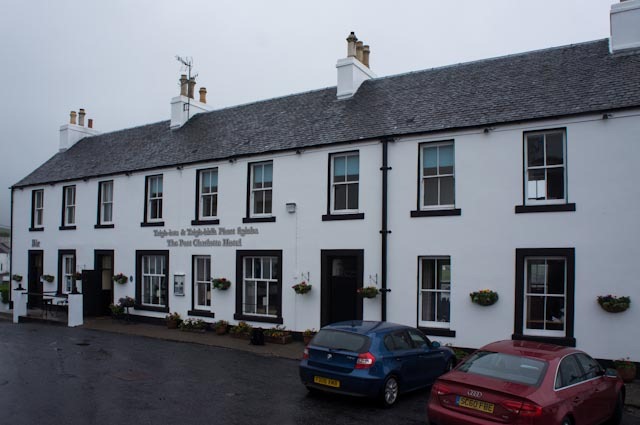 Port Charlotte was a good place to catch up on sleep, which we did and, after breakfast, headed out in search of the perfect dram of whiskey. First stop was Bruichladdich (“Bruch-laddie”). Bruichladdie is an old distillery that was closed in the 1990s. It was purchased in 2001 and “reborn.” The story we were told is that a young British bicyclist stopped by the gate, peered inside and decided on the spot to buy the place.

After breakfast at the Framnes, we were off once again for the drive back to the international airport, where we would leave the next day for Scotland. We drove straight through, arriving in Reyjavik in a rainstorm. Parking, we headed out on a shopping trip, purchased some gifts and had a terrific lunch at Solon, where we found out that there really is good food in Iceland, if you are either lucky or know where to look.