After a hearty breakfast of cold salami and pancakes, we headed out of town in the mighty Grand Vitarra, fishtailing down the road toward Latrabjarg, the westernmost point in Iceland and all of Europe.  We drove through an underground tunnel that must have been at least ten miles long, the Icelandic equivalent of the NORAD command under Cheyenne Mountain.  It was the only tunnel either of us had ever seen with an intersection (no stoplight), but we managed to stay on the right path, finally emerging the other end and racing past a bicyclist who had probably been inside the tunnel since 1972. 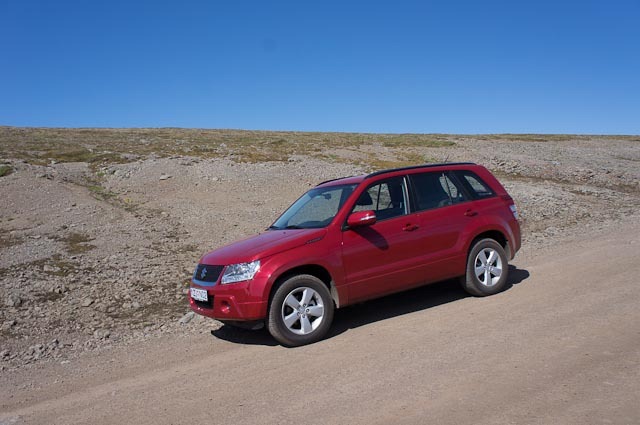 On we drove, across the peninsula, with stunning scenery and a proliferation of hay bails packaged in white plastic that we nicknamed “marshmallows.”  We stopped for a snack in a small fishing village, where Lewis (in a hurry to get to our next destination) attempted to order Belgian waffles “to go.” The bewildered waffle maker lacked anything other than china to put the waffles on, but was finally  able to convince Lewis  that we were not in America, and that this charming café was not a roadside Waffle House in Cleveland.  So,  we had a proper meal, and exchanged stories and pictures of Seattle with our pleasant hostess (who was soon headed on her own vacation, to the Pacific Northwest).  We were invited  to stay in town for the Viking festival later that afternoon, but we had birds to see in Latrabjarg, and we pressed on.

Along the way, we stopped at the falls at Dynjandi, a stunning torrent of water pouring over a cliff several hundred meters high.  Lewis perched himself over a slippery rocky promontory to get pictures for our fans back home. 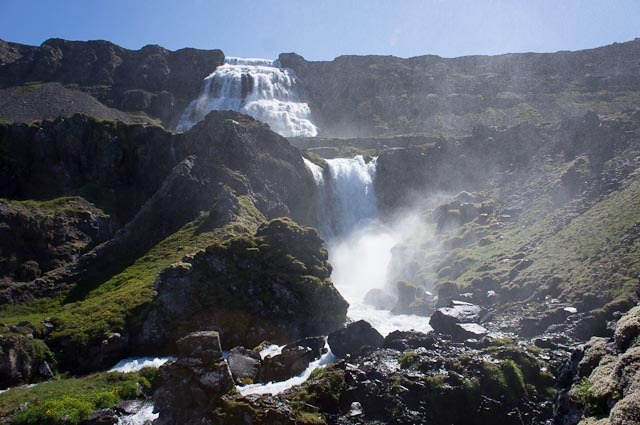 Approaching Latrbjarg, we found beautiful golden beaches, blue water, and a narrow road wide enough for one and a half cars.  After a tight squeeze, Lewis maneuvered the trusty Grand Vitarra down the road until we found a small museum, where we could stop so that Brad could get his 9th cup of bad coffee.  The museum housed the collected detritris of the life of the town’s most prominent citizen, including a broken down WWII vintage Navy troop carrier probably used to drop paratroopers during the Great War. Other than that, it was dull, so we pressed on to Latrabjarg, where we checked in to the rather unremarkable Latrabjarg Hotel. Not letting any moss grow under our REI boots, we immediately left for the cliffs of Latrabjarg, which we found (as promised) teeming with bird life.  Lewis finally was able to vindicate his decision to schlep 30 pounds of camera equipment, which he pulled out to document our birding adventure.  It was truly remarkable.  Untold thousands of gulls and guillemots perched on the cliffs, squawking and squabbling, and sometimes protecting their young.  We laid on our bellies, hoping to capture an iconic puffin, which we managed and Lewis was able to document with professional quality photo shooting. 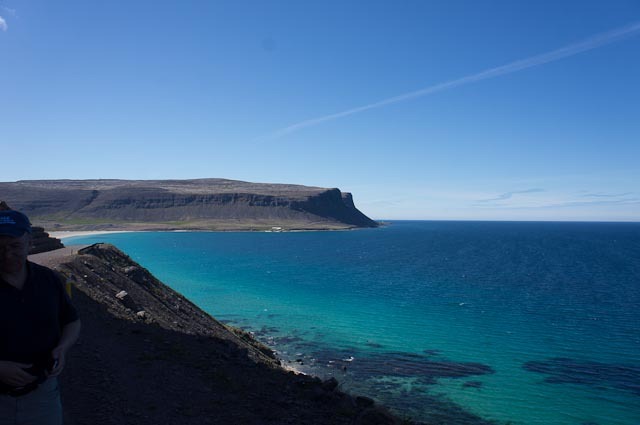 on the road to Latrabjarg 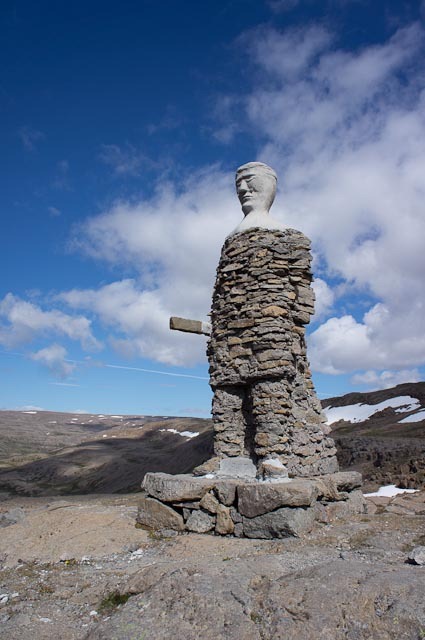 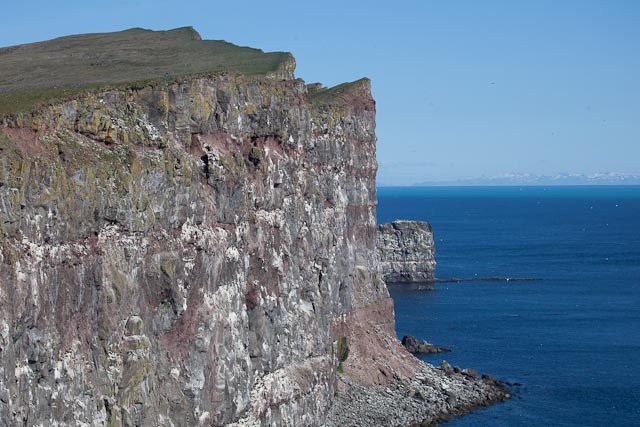 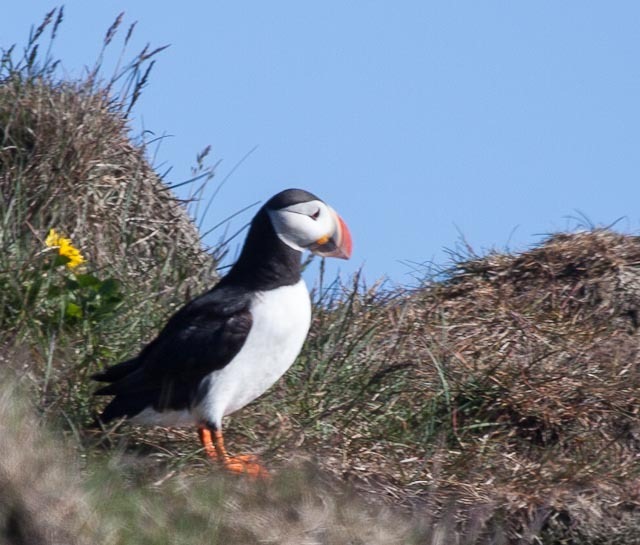 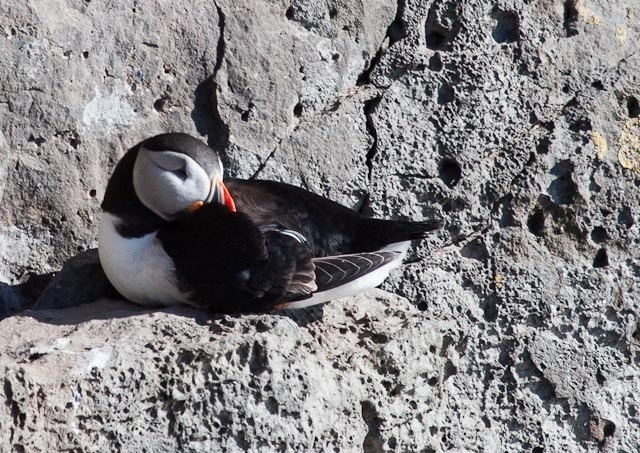 We like puffins much more ‘on the rocks’ than on the menu.  Icelanders may love their naturally wondrous surroundings but they also eat things that are not politically correct.

After a couple of hours, we headed back to the Hotel Latrabjarg, where we had what quite possibly was the worst meal of our lives, consisting of some type of mystery meat, soupy potatoes and a gelatinous mound of purple goo that was the specialty of the house.  Hungry, we wolfed it all down, and (it being near 11 and still light), headed down to the beach to look for whales. It had been a long day, and an even longer dinner, and Brad began to complain about the quality of cuisine.  This clearly was a mistake, because he was overheard by a guillemot, who began swooping down in a full blown aerial attack made in defense of the hotelier.  It was a scene out of Alfred Hitchcock, as Brad beat a hasty retreat, finally reaching the safety of the hotel, which he promised to say nicer things about, until the fire alarm in his room began beeping at 2 in the morning.  Getting up, and finding no one to fix the alarm, Brad got up on a chair and dismantled it, sure that he would soon face a fiery death, all because he had complained about the soupy potatoes. Fortunately, we made it through the rest of a fitful night, had another fabulous Icelandic breakfast of cold ham and yogurt, and set off for the Snaefellsness Peninsula.

A quick trip in the Grand Vitarra took us from Latrabjarg to the ferry terminal, where we boarded for our trip to the Snaefellsnes Peninsula, the central of the three major peninsulas in western Iceland. Lewis was hungry enough to try the “Captain’s sandwich,” a mistake, but not as bad as the soupy potatoes of the night before. Having been on the move nearly non-stop, Lewis promptly fell asleep on his chin, as Brad enjoyed the view from the deck of the ferry.

Isafjordur (issa-fyor'-thur) is a remote city in the Western Fjords region of Iceland. We flew into the precarious airport that requires the pilot to execute a 180 degree turn with one wingtip within 100 yards of a steep mountainside. The pilot had practiced the maneuver prior to our arrival and we landed safely. ..don’t miss that turn.. …ah, safely arrived at last.. Within an hour of arriving in Isafjordur we went kayaking under the able guidance of Runnar (like Gunnar, but with an ‘r’) of Borea Expeditions.