We arrived in Reykjavik at 6:30AM and resolved that we would stay awake all day to get synchronized with the day time cycle in our new time zone. So, we walked around Reykjavik like zombies.  The otherwise extremely polite Icelanders wondered if all Americans were such idiots.

It was so bad we slept through the Icelandic Sagas wax museum.  But, we were so startled by the witch being burned at the stake we woke up.  The guy who refused to submit to Danish authority had his head chopped off—that was also very realistic.  The Irish wenches whom the Vikings captured on the way to Iceland, who brought some red hair to an otherwise blond nation and who merged Celtic traditions with Norse traditions, were also very life-like.

Unfortunately, it was too dark in the wax museum for photos.  But, it was very cool that the Icelanders built a dome over the city’s massive water towers and put the wax museum under the dome.  The views were spectacular.

Reykjavik is a modern metropolis in a startling settling. 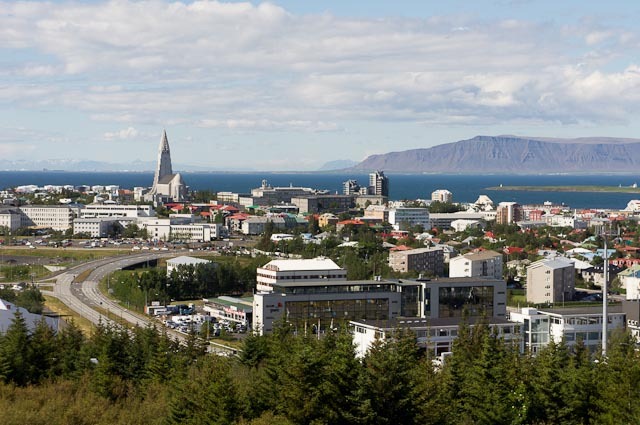 Iceland is a very Lutheran nation with plenty of tolerance.  Ninety percent of Icelanders believe that they cannot deny the existence of hidden people who also inhabit Iceland. More children are born out of wedlock, as a percentage of the population, in Iceland than in any other country in Europe.  And their parents and grandparents dote over them.

Isafjordur (issa-fyor'-thur) is a remote city in the Western Fjords region of Iceland. We flew into the precarious airport that requires the pilot to execute a 180 degree turn with one wingtip within 100 yards of a steep mountainside. The pilot had practiced the maneuver prior to our arrival and we landed safely. ..don’t miss that turn.. …ah, safely arrived at last.. Within an hour of arriving in Isafjordur we went kayaking under the able guidance of Runnar (like Gunnar, but with an ‘r’) of Borea Expeditions.

I am visiting Iceland and Scotland with my friend, Brad Marten. Actually, we’ve already been to the land of ice and fire. Now we are in Scotland, the land of clouds and rain. I will catch up and post highlights of our amazing trip to Iceland.