Glendive is a fine town full of the nice people we found at every stop in Montana. We had the opportunity to explore diverse viewpoints, too.

Here is the Glendive Dinosaur Museum, which is dedicated to employing the various local dinosaur fossil finds to support the alternative viewpoint of creation “science.” 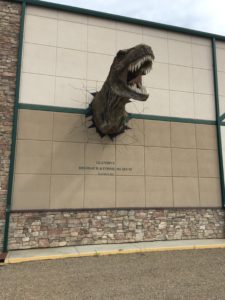 We saw a diorama of an Aztec emperor riding a triceratops and dinosaurs lining up to get on Noah’s ark with Noah either running out of room or dinosaurs “missing the boat” so to speak.  Radio carbon dating doesn’t work any more, if it ever did.  The earth is between 4,000 and 40,000 years old. There are extensive records of people living concurrently with dinosaurs as depicted on pottery found in Peru.

Shifting from “creation science” to a validly scientific point of view, Darwin’s view of evolution is hardly the final word. As a statement of science, it can be falsified wholly or in part as later explanations fit the observed facts more effectively. What’s quite well established by geologists is that the earth is very old and by biologists that species of organisms share DNA that is modified DNA from earlier species–in other words, there is descent with modification. Darwin lacked the scientific knowledge and tools to completely understand how the process of descent with modification worked, though he made careful observations that confirmed the results and elucidated some of the macro processes.

We’ve covered another large segment of large Montana–389 miles worth. With the prior week that means we’ve traveled 796 miles by bike through Montana. We’ve got about 49 miles to go to the North Dakota border so we’ll have done 845 miles to cross the whole state. Phew! (Full Disclosure: I did leave out 49 miles of the north-south path to get to Glendive, MT because we had a guest arriving and needed to fly out of Glendive to a wedding back east.

We’ve entered Minnesota from North Dakota. North Dakota was fascinating–not flat, more trees than Montana, very serious industrial scale agriculture, and sincerely nice and polite people everywhere. One fellow cut me off by entering the right-hand lane–where I was–making a left turn. He stopped; backed up; and profusely apologized saying that he drove that route nearly every morning and never encountered a car, let alone a bicycle, on the turn. He didn’t have to come back and apologize; he did and he meant it.