(See the other post about the two items that didn’t really work out.)

Here are the items of equipment that really helped the ride be a success.

To get over the Rocky Mountains, the Green Mountains, and the White Mountains some low gears were necessary and helpful. The steepest grades I encountered were around 12%. The steepest sustained grades (> 4 miles of continuous climbing) were more in the 8-10% range. It’s one thing to power over some seeming impossible ramp for 200 yards; it is quite another to keep climbing for 14 miles—our longest continuous climb. At the end of long climbs even a 5-6% grade is arduous.

Today’s so-called compact doubles (2 chainwheels—or gear cogs—at the front, where you pedal) that have all but replaced triple cranks (3 chainwheels) don’t cut it for touring.  In ancient gear inch lingo their lowest gear is 29 inches, which is the effective diameter of the wheel—or more properly the number of times the wheel turns for each time you turn the pedals multiplied times the actual diameter of the wheel. If you multiply this times good ol’ pi, you get how far the bike travels each time you turn the pedals. Instead of the compact double, I wanted a lowest gear of about 20 inches.

What we need is to reduce the number of times the wheel goes round for each time the pedals go round—lots of pedaling with lower muscular and aerobic effort and less forward movement (the work). There are two ways to skin this cat (apologies to cats—we don’t skin dogs): 1) make the front chainwheel smaller or 2) make the rear gear cogs bigger or both. (#Nerd Alert) The limitation on 2, making the rear cogs bigger is what a road-bike derailleur can handle. For Shimano, this is 32 (SRAM handles 36 and their 1×11 system handles 42!).

So, without substantially replacing the drive train of my bike, the solution was making the front chainwheels smaller. On a Shimano compact double, the smallest possible chainwheel is 34. That’s just too big for a slightly overweight 60-year old.

Enter the Sugino OX601D “micro-compact” crank. We’ll leave out the technical detail that makes this work—comment if you really want to know. I chose my 2 chainwheels to be 40 and 26 (22 is the smallest possible with this setup—suitable for scaling walls). Mirabile dictu! Now I get a low gear of 22”. At the beginning of the trip I used my very lowest gear when climbing. By the end of the trip with the shorter, but equally steep climbs of the eastern “mountains” (if there is no tree line or exposed rock it is not a mountain—sorry, east coasters) I would use the 2nd or 3rd largest rear cog rather than the largest. 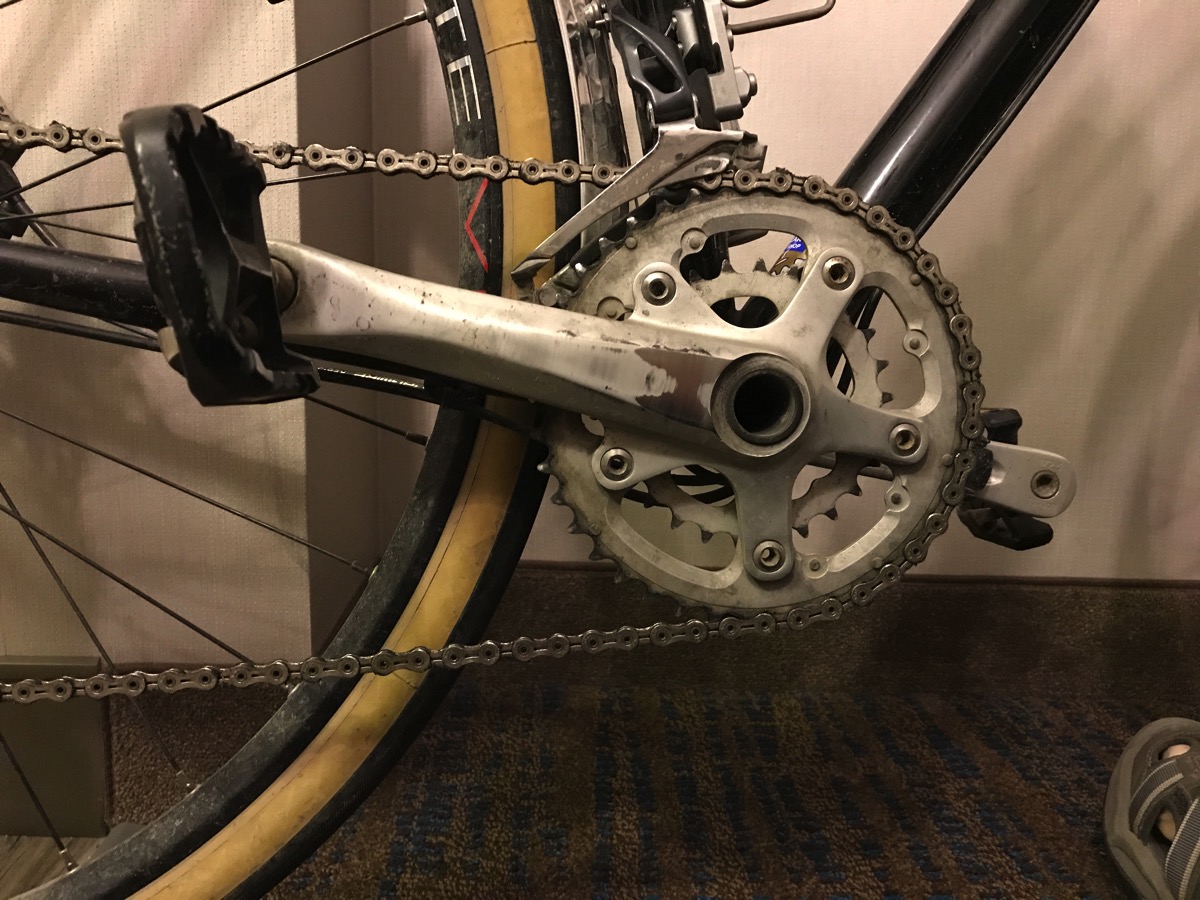 (#Way Nerdy) There was one trick to making this work.  If the front chainwheels are much smaller than standard, then the front derailleur must be made lower to be vertically very close to the larger chainwheel to make shifting reliable. The derailleur hanger on my bike (a metal tab that holds the front derailleur in place) is brazed on—it can’t be moved lower—and it’s lowest position was too high. Enter a very obscure part called the Wickwerks Fit-Link Jr. Adapter (I didn’t name this thing, ok). Putting this thingee into the front derailleur hanger provides a new position more than 1″ lower. Without this little 30 gram doohickey, this solution would not have worked.

I had changed to this crank about 4 months before the trip to make sure everything worked. Everything worked. This is a great crank and the lower gears made the climbs very doable. Shifting was awesome on my 2×11 speed system (Shimano Ultegra). It was done with no changes to the rest of the drive train. The good folks at Counterbalance Bicycles suggested this crank and I found the Wickwerks solution using internet search.

Fatter tires on a road bike, not a mountain bike, make the ride more comfortable; make it easier to ride on crappy pavement or gravel; and can reduce rolling resistance if the tires are very light with smooth tread. This is all true. The three options for such tires are the Vittoria Voyager Hyper (great tire—no longer made but still available), Schwalbe Kojak (35-622), Compass Barlow Pass (38-622) or Bon Jon Pass (35-622). I used a combination of the Compass tires. The evangelist for Compass tires suggests you can run them at any low pressure you want. That’s not true: there is only 1 layer of fabric reinforcement in the sidewalls. If you run them below 50 psi, the sidewalls will flex so much that the fabric breaks down—I ruined 2 this way. So, I run the front at 50-55 psi and the rear at 55-60 psi. These are very light tires for their size and roll really fast. Reduced rolling resistance is worth 5% or increase in speed or more. In nearly 4000 miles I only got 3 real flats (see the problem with rim tape), which is really quite good for tires that dispense with any sort of puncture protection (kevlar belts, extra thick rubber, etc.). 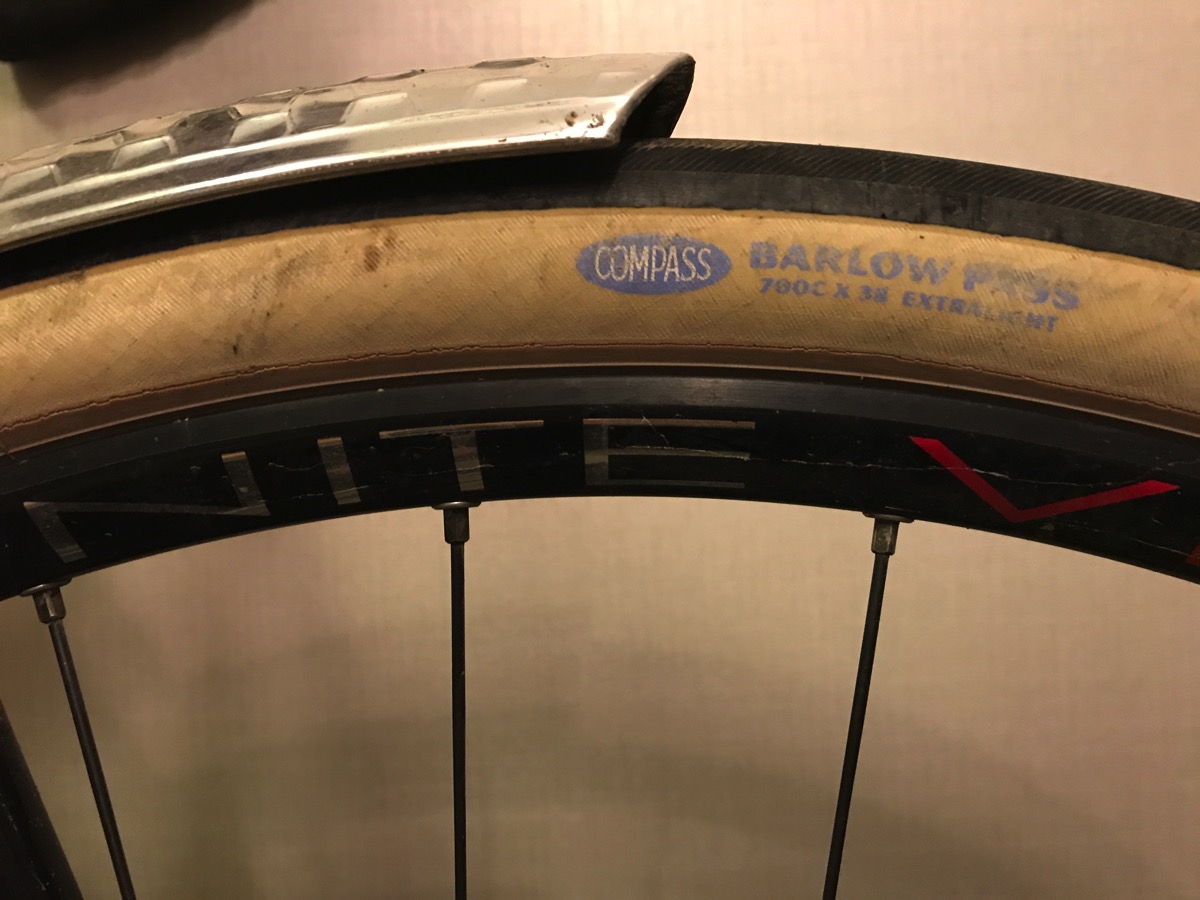 This trip was as much a planning and navigation expedition as an athletic endeavor. Every course across the country was planned in advance. And re-planned many times to avoid unrideable gravel roads. Fine packed pebbles are great for a bike trail; dirt roads that are graded smooth and used by cars are fine; not fine at all are tracks for agricultural implements (North Dakota), construction roads that seem like little more than linear quarries, and trails for ATVs (Wisconsin, Michigan). I also replanned to go to better places to stay for the night and to balance distances across days.

I used the Garmin Edge 1000 bicycling GPS (Garmin has since upgraded this to the 1030). This is a very fine piece of hardware. My friend Reed convinced me that this was a superior option to using my phone: longer battery life when actively using the GPS (8+ hours vs. 2 hours), more visible in sunlight, far simpler to operate while on the move. It did a great job for all 68 riding days. Rain didn’t faze it. I ran out of battery only twice—once because I was out over a long time and didn’t turn it off during stops and once because I tried to get 2 days on a single charge.

Routing software remains a work in process. All of the routes were planned in Ridewithgps.com and then downloaded into the Garmin. Ridewithgps is the best game in town though if Garmin gets serious (hmmm…. …questionable) maybe not forever. Ridewithgps route planning must be done in a browser on a computer (the browsers in tablets aren’t compatible enough—or tested enough—with the heavy, heavy javascript used by Ridewithgps). So, that is a bit inconvenient on the road. It is necessary to inspect every inch of a planned route for little greeblies like loops and spurious side branches (spurious spurs?) that sometimes occur. It was also necessary to closely inspect all planned routes in satellite view to make sure that all of the roads selected were rideable.

Dynamic re-routing by the Garmin device was a total bust—a joke. When I encountered road construction detours—about 3 times—the device could simply not find a sensible alternative route—EVER. It’s only rerouting option seems to be “make a U turn”. It doesn’t understand obvious parallel routes. So the only option is to never choose rerouting—just ride it out and hope you get back on course. Or pull out your phone.

You might ask, “Gee, why not use Google Maps on your phone?” Well, that assumes totally reliable and fast cellular data coverage always.Bad assumption in rural Montana, North Dakota (better than in Montana), and Wisconsin. Mountains and large hills are a problem for coverage. It is important to have maps in the device and routes in the device so that data coverage is not required and battery life is extended.

Position tracking so that the support team could keep track of the riders was interesting: Where were we? Were we moving? Were we alive? We tried using the Garmin beacon feature but it was difficult to set up across devices and not very reliable. Apple’s “update position” via text worked well when cellular data coverage was good. I think real tech companies like Apple and Google will solve this because it is useful to many people in many contexts. Fringe technology companies with hiring challenges and limited capacity won’t solve this.

I have to say that overall the combination of Ridewithgps and Garmin worked pretty well given I was pushing both well beyond their normal usage for day rides in or near urban areas. The times things didn’t work stand out for the intense momentary frustration. To be fair, messing up for no more than 40-60 miles of 3950 is less than 2% frustration. 98% satisfaction isn’t 100, but it served me well and I can’t imagine having done the trip otherwise.

Some people care a lot about equipment. I certainly like equipment. And I did ride a bike across America; but let’s not talk about that because a lot of road bikes and mountain bikes would work just as well. Let’s talk about things that worked and didn’t work to make the ride successful. First, what didn’t work: Saddles First, saddles and butt pain. I had no problems with seats for my training rides, which were mostly 30-40 miles with 3-4 50 mile rides in the final 2 weeks.

Early on I passed up most bike shops. We had what we needed. Then, the quest for the perfect seat began; I needed more spare tubes and patch kits, and the great rim tape fiasco began and was resolved. Saw a lot of bike shops: White Fish, Montana Glacier Cyclery Great people. Bought electrolyte solution. Wanted more; couldn’t justify. Sportsman & Ski Haus Bought a Specialized e-bike for Emmy so she could join the ride and some tubes.