Early on I passed up most bike shops. We had what we needed. Then, the quest for the perfect seat began; I needed more spare tubes and patch kits, and the great rim tape fiasco began and was resolved. Saw a lot of bike shops:

Bought a Specialized e-bike for Emmy so she could join the ride and some tubes. The ebike was a kick. Emmy could pass me on the hills so mercifully rode in “eco” mode. Later, Jay, Ellie, and Susie all gave it a whirl. Emmy used the ebike as a transition to the Kona Rove ST and road the hard way for two thirds of the trip riding 20 to 42 miles each day.

Great owners. David has ridden across the US horizontally and vertically (E-W and N-S). Just bought patch kits and tubes.

Bought every tube and patch kit they had: one of each. Mostly, a place that did repairs on snowmobiles and ATVs, but provided bikes for the local kids.

Bought a sleaveless Upper Peninsula of Michigan jersey and new gloves for Emmy. Bought rim tape and patch kit for me.Earned some Shot Blocks as a premium.Wish I needed more stuff, but couldn’t justify.

Great support from the owner on the first attempt to cure the rim tape fiasco. Valiant effort; still more to do. Bought a very cool hat. 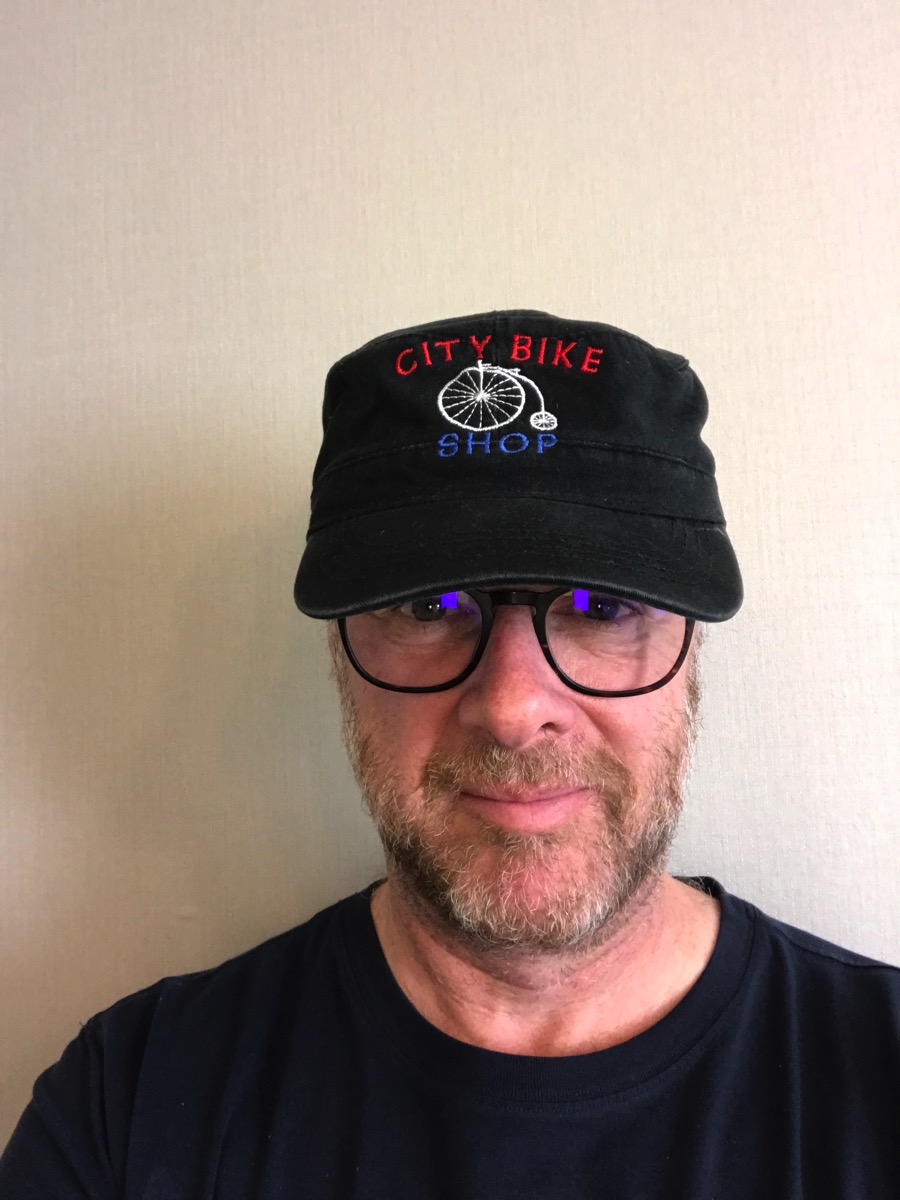 Made a more serious effort at the rim tape problem. Worked on the back wheel, but needed additional owner repairs on the front wheel.

I think we went to Jack’s Bike Shop where I bought some patches.

Mounted 2 different seats on a trainer so I could try before I bought. Bought the Specialized Henge in 155mm width. Saved my butt for quite a few miles—until Middlebury, VT.

Bought a new pump (pivot bolt fell out of the handle of my much loved Topeak Mini).

Yes, it’s a bike shop and a florist shop. The concept preceded the name. Bought a bike seat (meh!—not their fault, I picked it out—it’s a great shop) and new bike shorts. Charming old building. Did not buy floral arrangement for handlebars. Missed opportunity. 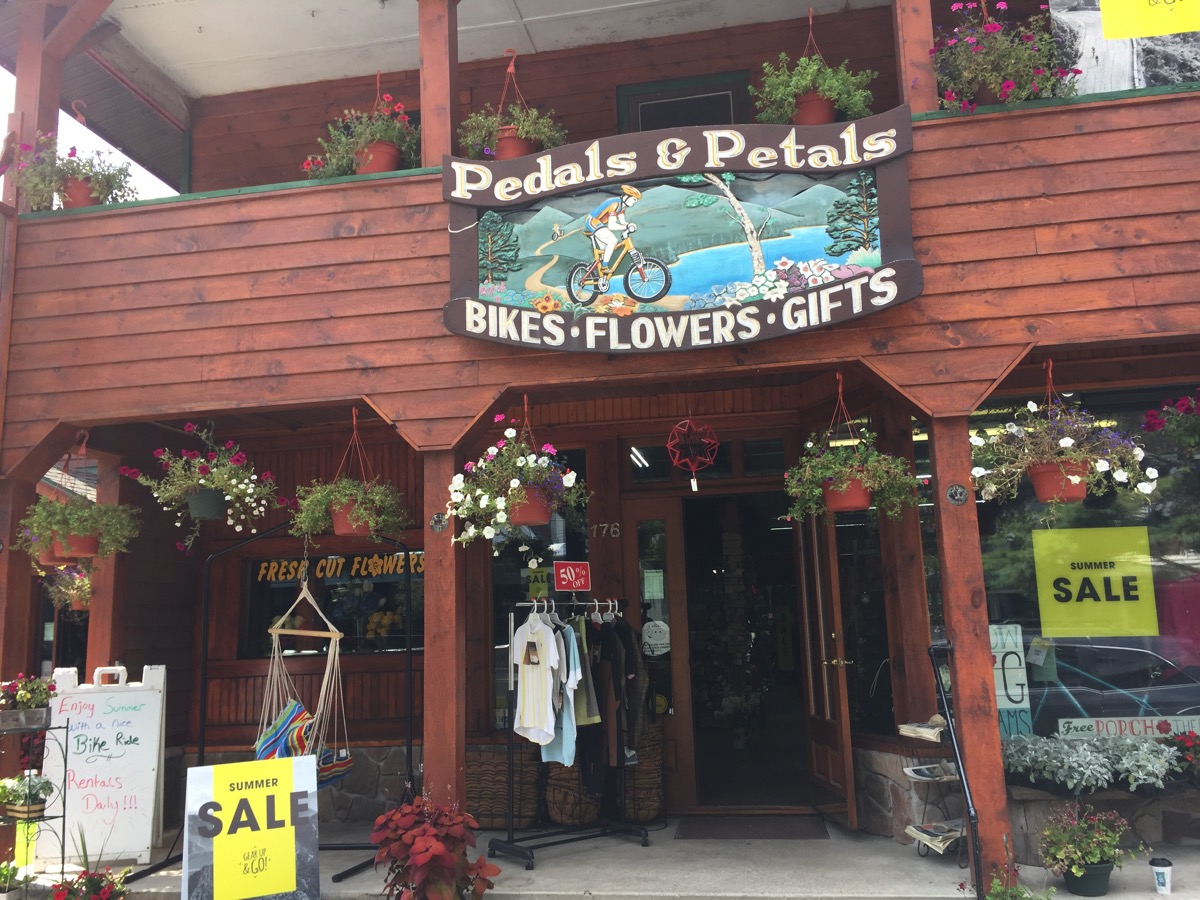 Great place. Very high end. Great helpful owner who mounted 2 different seats on a trainer so I could try before I bought.

Next to awesome coffee shop and bakery. One stop shopping, so to speak. 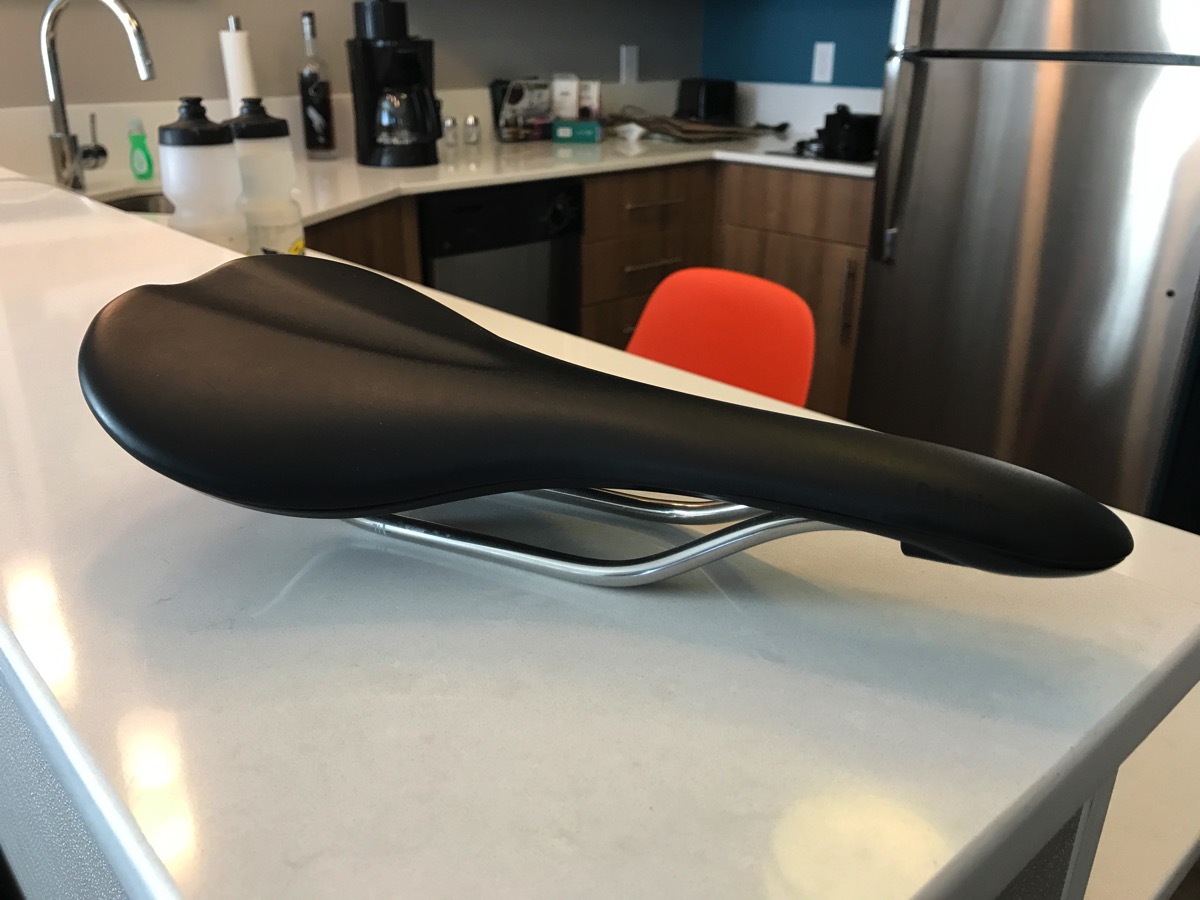 Only in Vermont: an old house converted into a bike shop. Stuff in every room, the basement, outside.

The cool thing was I walked in and heard a guy talking about Port Townsend, WA. Turns out Zak lives there. His dad owns this shop in Vermont and Zak comes out to work during the summer. He builds custom frames in Port Townsend. The Saturday following my stop they were celebrating 30 years in business with a pizza party for the whole town. 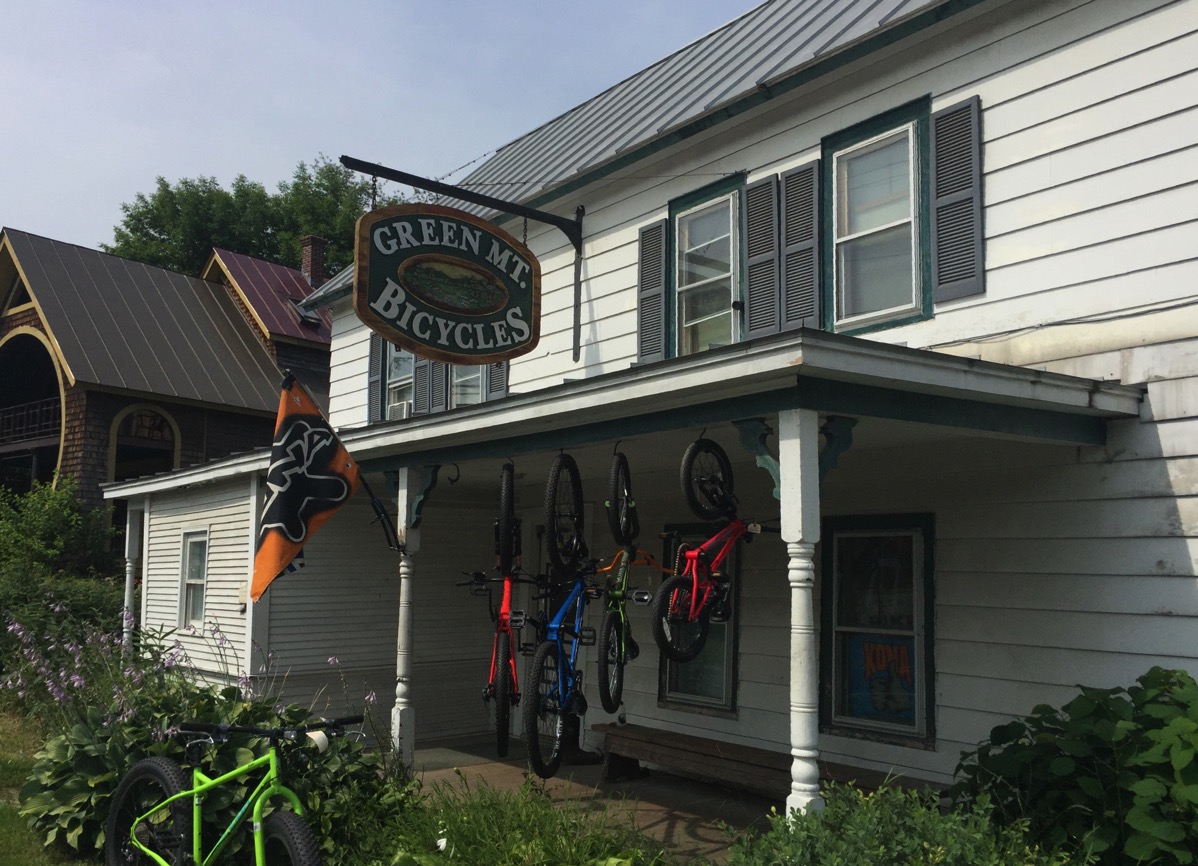 Arranged to ship 2 bikes (Popeye and Olive Oil) back to Seattle using Bikeflight.com. Great owners. Bought a bike there 5 years ago that I named “Bronco”.

After the ride was over, I bought a new seat (the search will never end) and new gloves. Huge selection; lots of high end stuff; excellent service section. 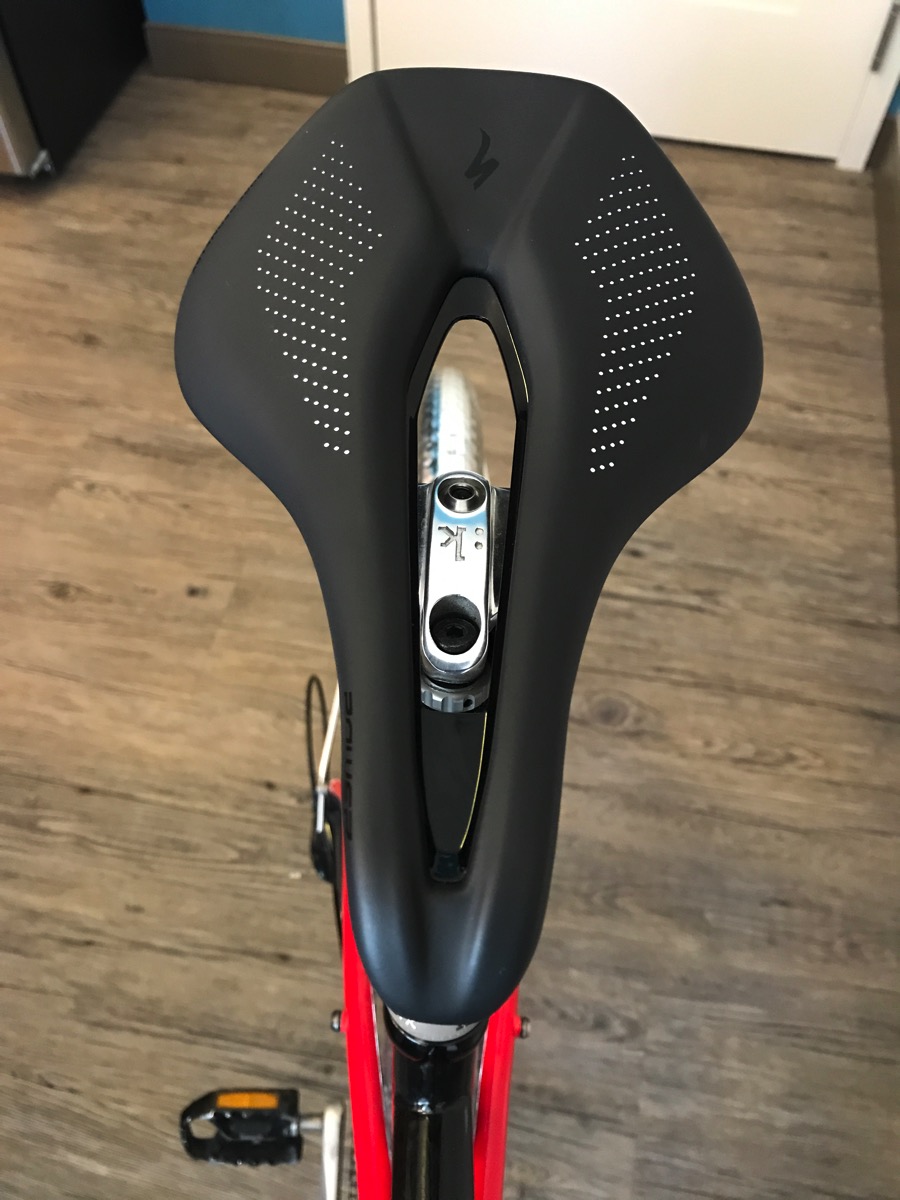 And back home, I’d be remiss if I didn’t mention where it all started:

This is where I bought the Volagi Viaje steel bike—named “Archie”—that I rode across America. I got a pre-ride checkup for Archie and bought a bunch of spare parts that I gratefully did not need. Water bottle with 3,950 miles on it: 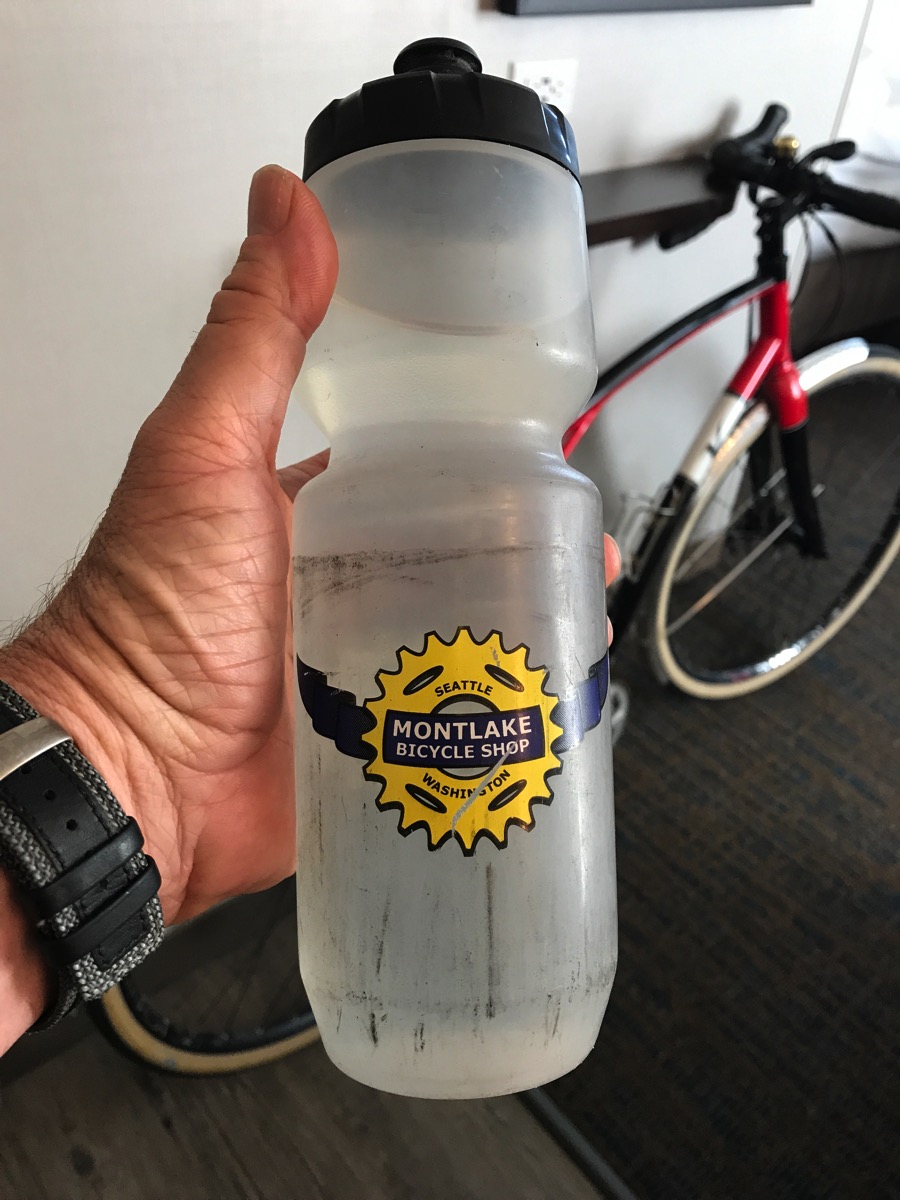 (See the other post about the two items that didn’t really work out.) Here are the items of equipment that really helped the ride be a success. Gears To get over the Rocky Mountains, the Green Mountains, and the White Mountains some low gears were necessary and helpful. The steepest grades I encountered were around 12%. The steepest sustained grades (> 4 miles of continuous climbing) were more in the 8-10% range.

Our host, David, at the Williams Pond Lodge near Bucksport, Maine, sends us off with a stirring bagpipe rendition of Chariots of Fire, which David informed us, was really an old Scottish folk song (weren’t most great British things first Scottish?). Bagpipes Sendoff video link