Emmy likes her “omafiets”. It’s by Gazelle, a large Dutch bike manufacturer. It’s called “Ambiance” and has 7 gears, so it is much more advanced than a classic omafiets, which is a black single speed coaster-brake bike. By the way, “omafiets” means grandma’s bike, which is not applicable to Emmy, as yet. 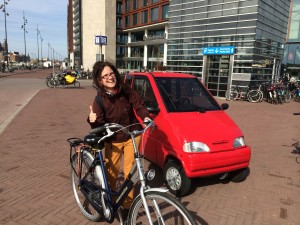 Lewis brought his gear-head folding bike from Seattle. It’s a Bike Friday Tikit, the like of which has not been seen in Amsterdam. They have Bromptons, but no Bike Fridays. No one knows how cool he is… (maybe that’s because–you know). To look a little more Dutch, he added a milk crate to the back. 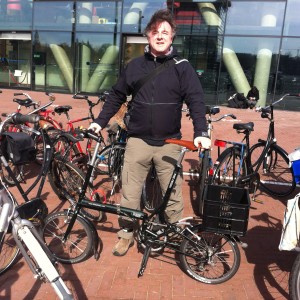 Rental bike shops are all over Amsterdam. Instead of renting a bike for the two months we are here, Emmy decided to buy a used bike at a bike shop just one street over from Vondelpark. We resold the very same bike to the very same shop, a fair price at both ends. This was a much more frugal way to have a bike than daily rentals for 2 months. Frugality is important in the Netherlands.

We flew in directly from Seattle, departing mid-afternoon and arriving bright and early in the morning. The morning was that; we were not–having not achieved the necessary state of pre-departure exhaustion or inebriation that would induce sleep enroute. Taking the canal tour is a great orientation to Amsterdam and demands neither effort nor thought. We had been to Amsterdam last year and wanted to see something new. So, we went to the Nemo Science Museum along with hundreds of Dutch families and their happy, cute, very indulged children.

What’s a Hofje? A hofje is a courtyard of homes built by the wealthy to house the poor, the old, the orphans or the widows. They are hidden from the streets behind a canal house door. Once you open a door to a hofje, there is a lush green courtyard inside of peace and quiet. Hofjes of the Jordaan The Van Brienen Hofje (89 Prinsengracht) is our next door neighbor.