A hofje is a courtyard of homes built by the wealthy to house the poor, the old, the orphans or the widows. They are hidden from the streets behind a canal house door. Once you open a door to a hofje, there is a lush green courtyard inside of peace and quiet. 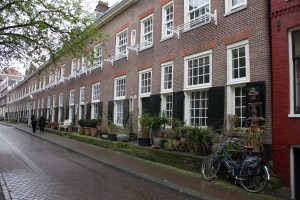 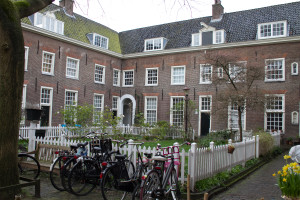 Emmy Emmy likes her “omafiets”. It’s by Gazelle, a large Dutch bike manufacturer. It’s called “Ambiance” and has 7 gears, so it is much more advanced than a classic omafiets, which is a black single speed coaster-brake bike. By the way, “omafiets” means grandma’s bike, which is not applicable to Emmy, as yet. Lewis Lewis brought his gear-head folding bike from Seattle. It’s a Bike Friday Tikit, the like of which has not been seen in Amsterdam.